In the autumn of 1921 seven sailing enthusiasts met to form the Hayling Island Sailing Club with rules based on those of the East Cowes Club, of which the first Hon. Secretary, Mr R. C. E. McKilliam, was a member. The other six were Mr J W Simpkins, (the first Commodore), Mrs Nixon, Dr Knight, and Messrs Baker, Logan and Dawe.

Although recreational sailing was beginning to be enjoyed by many people, any organised activity had come to a halt with the First World War but afterwards small fishing and waterside communities such as Hayling looked for organised events and activities. The first clubhouse was originally a fisherman's cottage adjacent to Salterns Quay, and known as Quay Cottage. In 1928, the Club moved into specially built premises overlooking the creek on Wall Corner. This site is now occupied by Mengeham Rythe Sailing Club.

With the keen support of the local tradesmen and residents, the first regatta was held in 1922, with a number of entries from Bosham, Emsworth, Langstone, Itchenor and Portsmouth. In other parts of the harbour, clubs were being formed and the annual regattas brought sailing enthusiasts together and continue to this day. 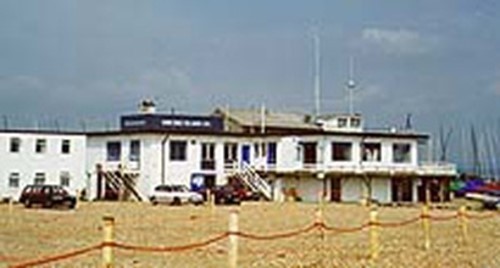 In addition to sailing, the Regatta programme of 1922 included rowing and swimming races, pillow fights on a pole slung between two barges, and concluded with a mud-patten race. Not surprisingly this race was won by some Emsworth fishermen, who afterwards rescued Club members, naturally inexpert in this activity, who had ventured to compete and become stranded in the mud. In the evening, there was dancing on the green beside Quay Cottage. Weather conditions were ideal throughout, and the whole event proved highly successful.

As a result of this auspicious beginning, about 120 members were enrolled at an annual subscription of 1 guinea, and enjoyed handicap racing with a varied collection of boats. However, the desire for a one-design led to the introduction of a Hayling Island Class boat costing some £50 fully equipped. These were 16ft. clinker built, centreboard craft, three-quarter decked, with sliding gunter rig. They were not particularly fast but were sea worthy in all conditions.

A standard type of 10ft. pram dinghy was introduced in the late 1920s as an introduction for the younger members, and slowly the appeal of one design class racing was recognised. As a result of this, apart from the Annual Regatta, handicap racing gradually died out on a regular basis.

The original Club Burgee was designed by R. C. E. McKilliam, with the approval of the founder members, and consisted of an accurate replica of the Hayling coat of arms on a red background. Over the years this has been modified and today, the logo seen on the website and used on publicity material is a natural progression.

In 1936 the club moved to its present site, a unique position on the southern shores of Chichester Harbour, on the bulbous tip of a narrow peninsula, known as Sandy Point.

Here it dominates the harbour entrance and provides immediate access either to the open sea or to the expansive, land-locked waters of the harbour. Sailing is possible at all stages of the tide and times of year.

Until 2001 the Clubhouse was a two-storey brick building, built in a cruciform shape, and designed by the late Captain Ivan Snell, MC.

With a large restaurant and bars on the first floor, together with a balcony which leading from them, it commanded magnificent views of the harbour, the Downs to the north, and the coastal plane stretching away towards Chichester and beyond. To the south-east lies the Sussex coastline visible as far as Selsey Bill, with the Nab Tower standing guard to the South.

With a lottery grant awarded to the Club, in recognition of becoming the RYA's Centre of Excellence on the South Coast, redevelopment of the Clubhouse was completed early in 2003.

On Friday 14 March 2003, HRH Princess Royal, officially opened the new lottery-funded clubhouse. Accompanied by the Commodore, Tim Hancock, HRH was shown around the new building and introduced to HISC members, Mayor and Mayoress of Havant and representatives from the Royal Yachting Association, Sports England, Havant Borough Council and TSL, the building contractors.

With a similar layout, still commanding wonderful views of the harbour and the sailing, the new building provides much improved club facilities. As well as state of the art changing rooms, the new general club facilities, bars, dining room and services provide a comfortable environment for all Club members.

There is a large dinghy park with access to the harbour at all states of the tide. Winches are positioned to assist in the launching and retrieval of the heavier boats and a pontoon is available on the northern side.

Every weekend during the main sailing season the Club holds points races for a range of dinghy, keelboat and cruiser classes, and combines with the other clubs in the harbour in the organising of Regattas and Chichester Harbour Federation Week. Open winter and spring series are run for the dinghy and cruiser classes.

Hayling Island Sailing Club enjoys a high reputation for its organisation of World and National Championships, Olympic trials and open events; the choice of sailing waters ensuring that, barring the most extreme weather conditions, events can be completed and enjoyed.